The Ask a Curator Day is an initiative that Jim Richardson started back in 2010, and Mar Dixon has continued as its main promoter since 2012. It is a journey that has been held each September on Twitter, and fosters the conversation between curators from museums, galleries and art centers all over the world with Twitter users. All the conversations and debates use the hashtag #AskACurator, which allowed us to analyze all the journey conversations. We have monitored all the tweets that contained the hashtag #askacurator and  those that mentioned @AskACurator. First tweet was gathered the 11th of August, 2014, and the last one, one day after the end of the conference, the 18th of September, 2014.

The conference in numbers

We have gathered 47.546 tweets, tweeted by 12.952 different users. This is, an average of 3,67 tweets per user. Tweets are distributed over time as you can see on the following graph:

77% of the tweets were published during the Ask A Curator day (Sep 18th), and 9% the day before. We stopped the analysis the day after the event, in order not to alter the result of the study, as a lot of conversations (including the ones from  LaMagnética) had a strong bias towards museum professionals, moving from AskACurator’s main objective: the conversations that emerged from museums and museum professionals with the general public.

The objective of this study is to analyze the relationships between users during Ask A Curator. It means that we do not focus on previous relationships –who follows who, or previous mentions and retweets- but on those interactions related to Ask A Curator. The established connections are depicted on the following graph: each node is a user and each edge represents a mention or a retweet from one user to another.

The graph is too dense in order to be readable, so in the following image we present only the core users, the top 6%, selected by their influence. In the calculations involved in the analysis we use all users and tweets, but in the more dense graphs (general graph, US and UK groups) we have to limit the images to the most influential nodes in order to keep the images readable. 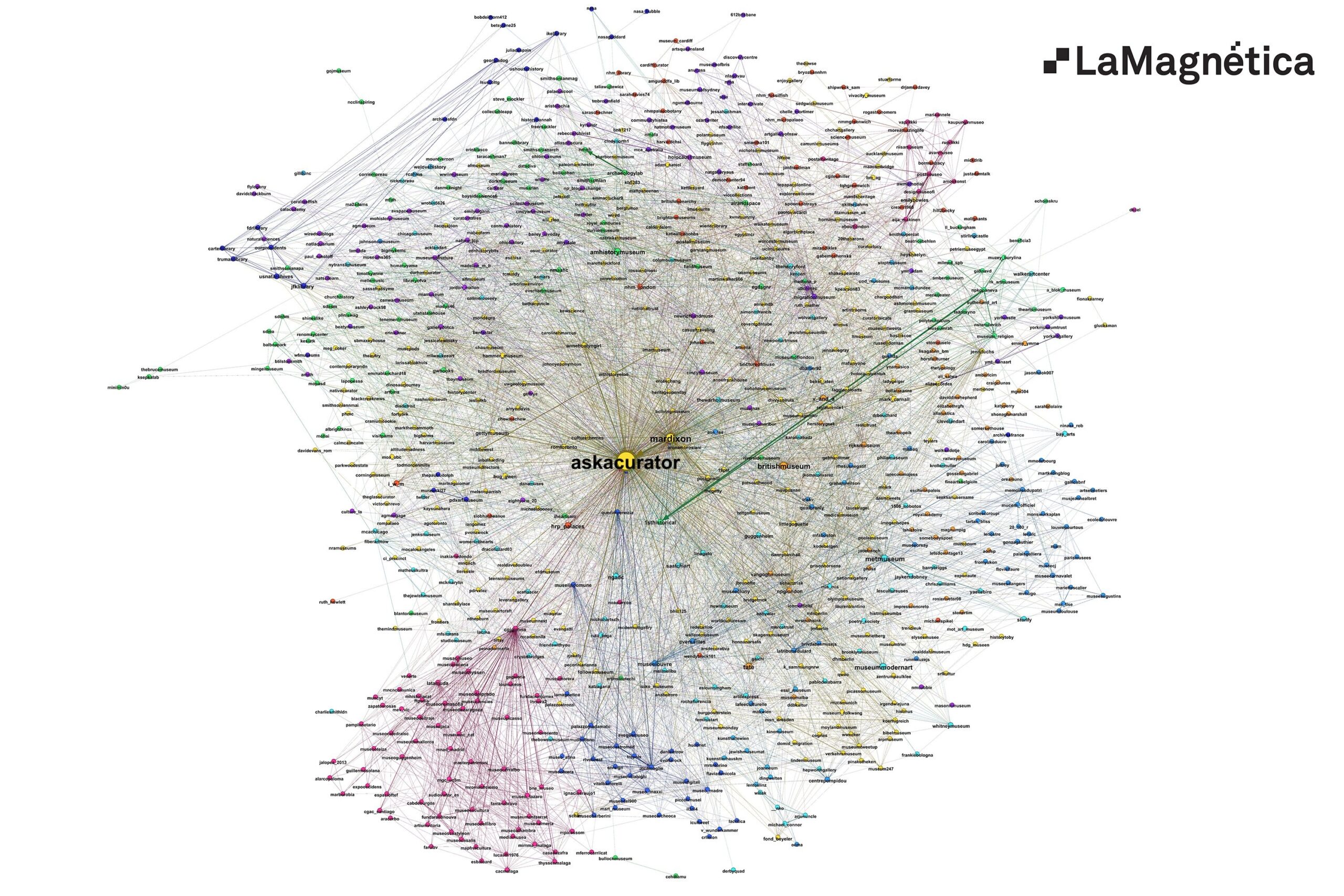 To download a high resolution image (9.000×6.000), click here. WE ADVISE YOU TO DOWNLOAD IT AND OPEN IT WITH YOUR IMAGE EDITOR, as your BROWSER’S CACHE MEMORY CAN LIMIT THE RENDERING OF THE IMAGE.

The graph consists of 13.786 users (nodes) that are involved in at least one tweet including #AskACurator or @AskACurator (or both), either being their author or being mentioned. There are 42.356 unique mentions between these users (edges). Neither the nodes nor the edges of the graph have a constant size: the size of a node shows its relevance; while the thickness of the edge indicates the number of mentions and RTs between a pair of users. Here is some data defining the graph, the structure of the Twitter conversation, which we will use in our analysis:

This data let us draw some conclusions:

The different communities seen on the graph are groups of museums and users of the same country or language. We have highlighted some of them on the graph so they can be easily identified. The largest communities of the graph are the United States and the UK ones, but as long as they occupy a big part of the graph, we haven’t put their name on it. As Mar Dixon explains on her post about the initiative, this year a total amount of 721 museums from 43 different countries have taken part in the Ask A Curator initiative, and are distributed as shown in the following chart: 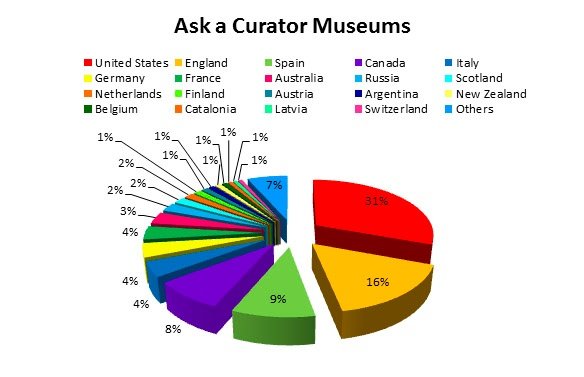 We observe that the United States and the UK represent more or less a 50% of the total museums taking part of the event, bringing 221 (US) and 118 museums (UK). The relevance of these two communities is also notorious when we check out which are the most influential users. In order to seize the relevance of a user within the network, we can use different centrality measures. In this analysis we are using two: PageRank (relevance, influence) and the number of received mentions (a measure easier to understand and calculate, yet less accurate): 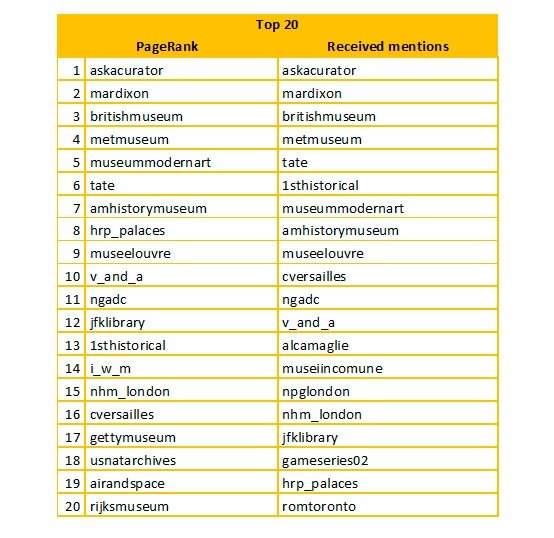 Note that the first 4 users are the same in both rankings while most of the rest, although they switch positions, are repeated in both lists. From the list of 20 users, 15 are found in both of them. If we analyze the nationality of each user that appears among the Top 20 list according to its PageRank, we’ll have them distributed within the following countries: 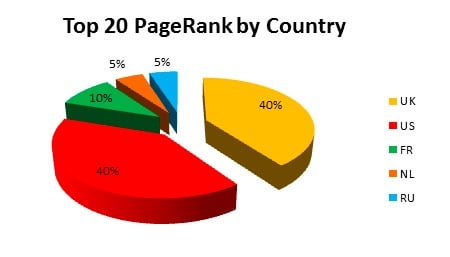 The relevance of US and UK museums is due to several facts:

The following image shows the main Twitter users in the American community: 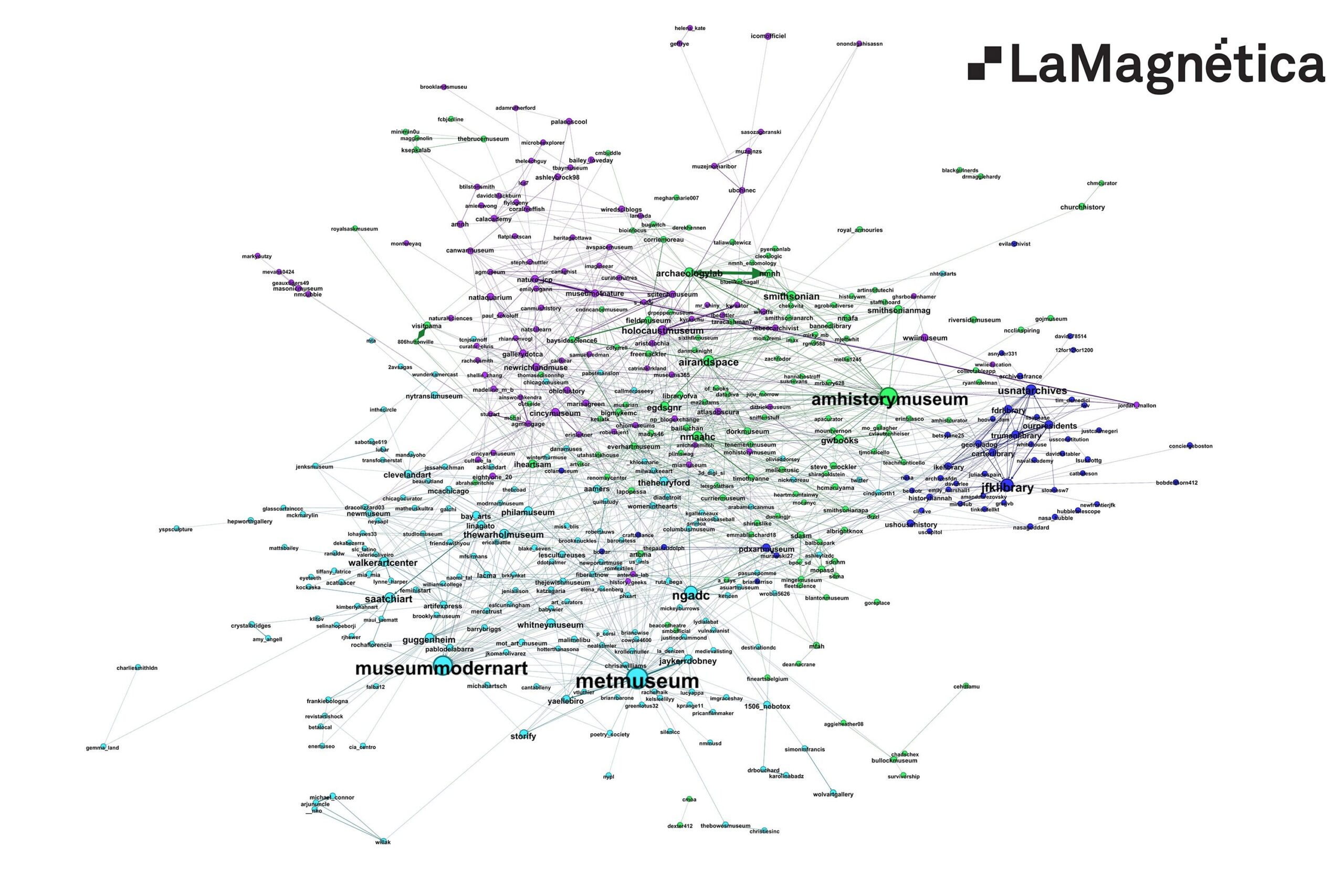 Likewise, the most influential users in the British community: 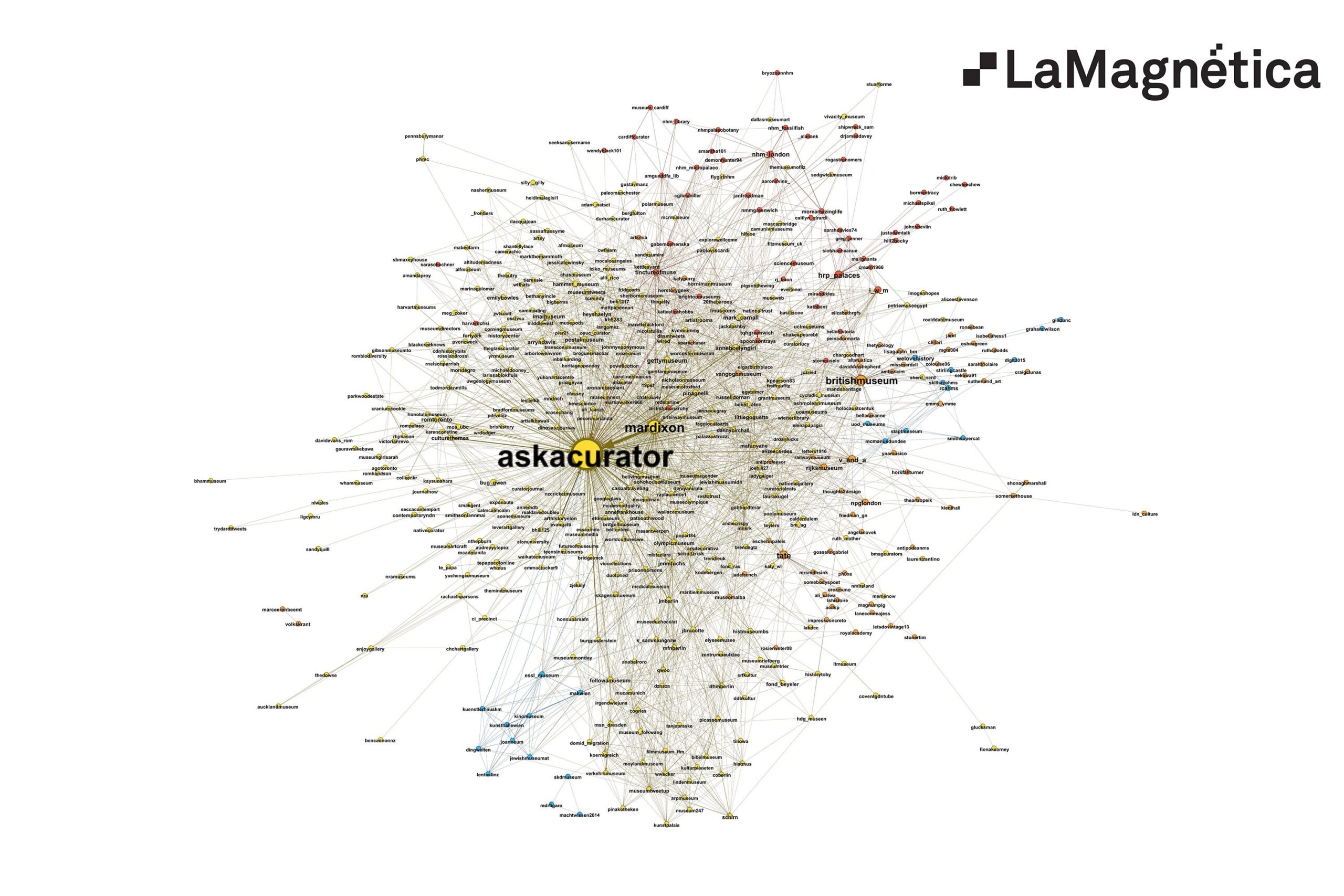 Core users in the Spanish community: 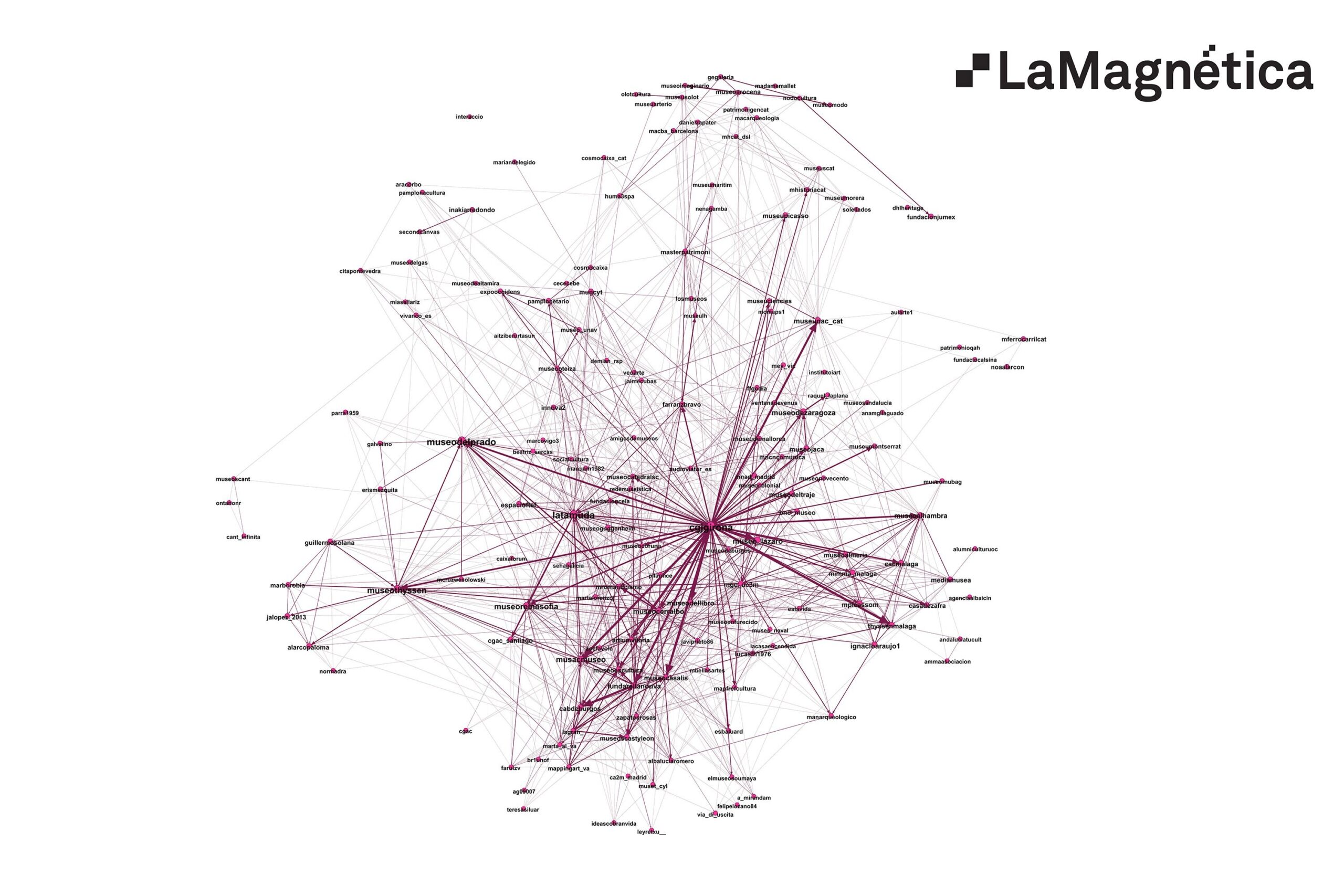 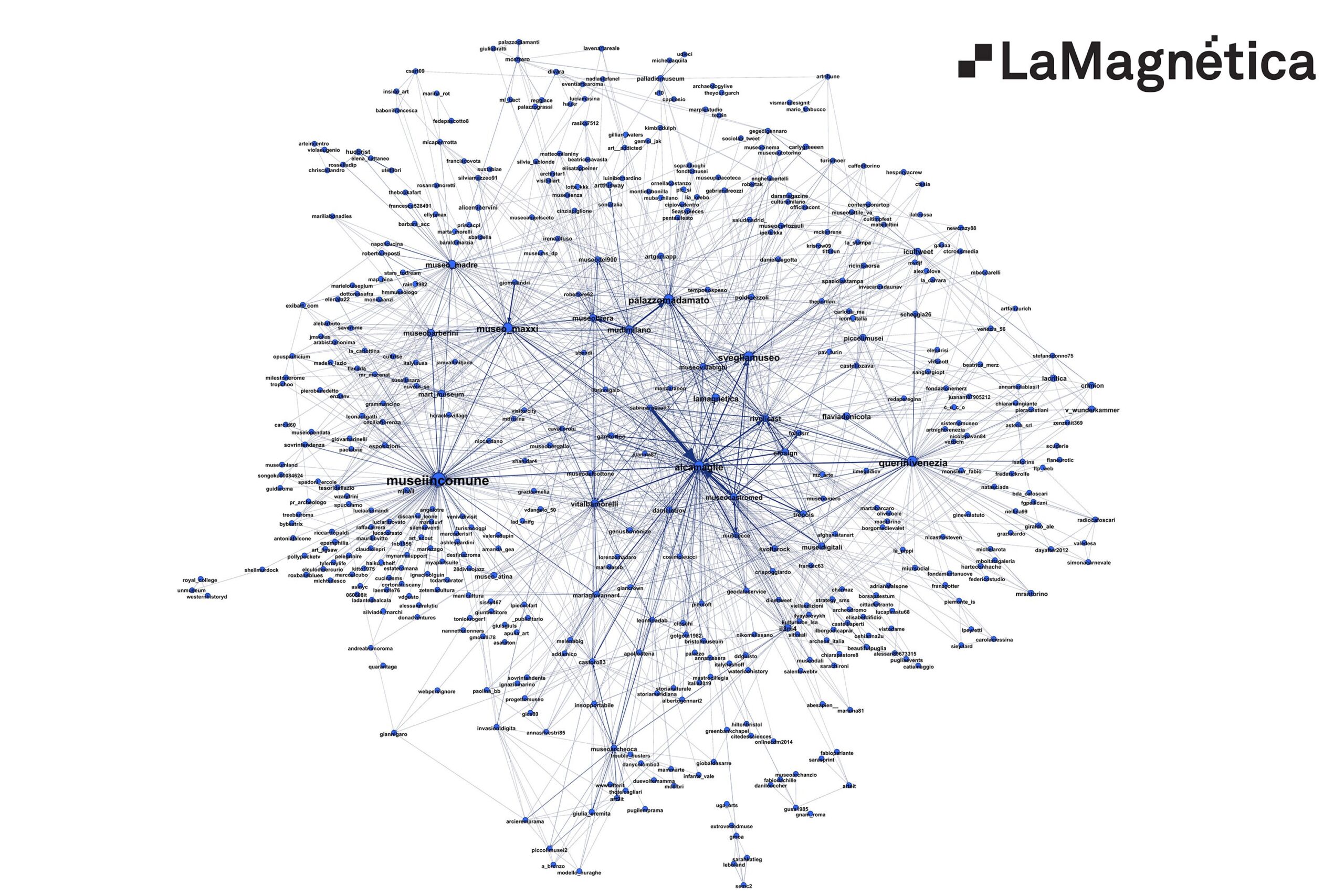 Ask A Curator from the British Museum’s perspective

The image below focuses on all the users that are connected to the British Museum in the #AskACurator tweets, and how they relate to each other. This is a close up on the British Museum environment. If you are interested in having this graph for your museum, send us a tweet or email us at “alex at www.lamagnetica.com”. During the last few days we have sent this kind of images to all the museums that have asked for them: Washington’s National Gallery of Art, Bradford Museums, Il Museo Civico di Paleontologia e Paletnologia di Maglie (Rome), etc.

This kind of graph (and all the data and analysis based on them) over a longer period of time allow us to have a deeper understanding of our museum communities. How our followers relate to us, how they relate to each other, who are the most influential users in a group, etc. And this understanding leads to a better definition of our strategy and a better way to assess our Social Media efforts’ results. 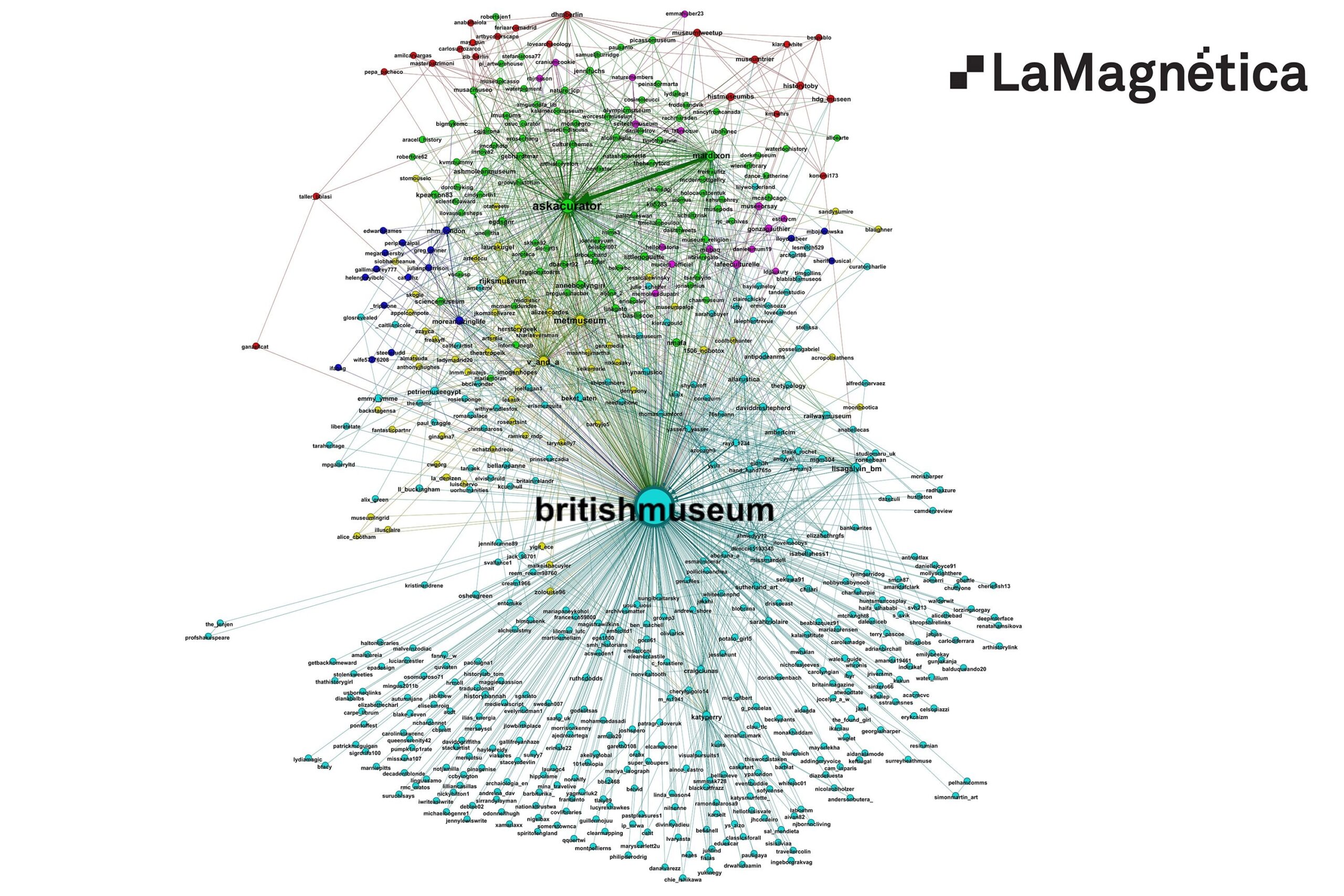 Taking into consideration how large these images are, we recommend you to download them and open the graphs with your image viewer software. Opening them in the browser could lead to some issues due to the lack of browser’s cache memory, particularly when opening several images in different tabs.

You can also download all the images in this ZIP file (150 MB) and open them with your Photo Editor software. The whole graph is too large and dense to be read. This is why we have erased the less relevant users in the global graph images, but we have kept them in the country images and in all our stats.

AskACurator – Global Graph (after a first filter, keeping only 2.400 profiles, a 17% of the total): Download

We offer different versions of the country communities’ graphs. The complete versions are more dense and difficult to read but they include all the connections within a community. The stronger the filter, the easier are the graphs to be read. The filter is done by the relevance inside a community based on a Page Rank-like centrality measure.

We also offer a British Museum’s environment graph about the conversations that took place during the conference.